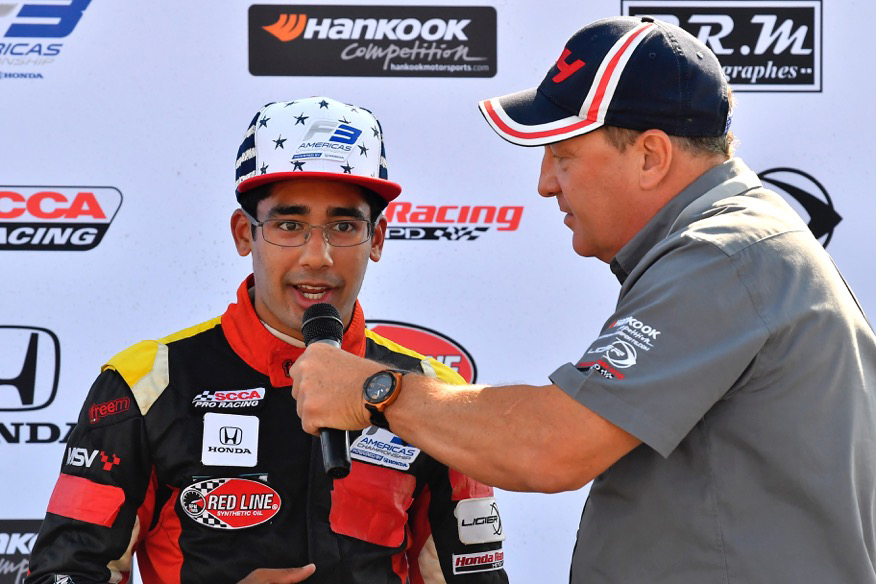 It was a podium-winning weekend for Momentum Motorsports at the Virginia International Raceway (VIR) this past weekend. Taking on the F3 Americas Powered by Honda program, Quinlan Lall put his name on the podium twice over the three-day weekend while Kent Vaccaro added three more top-ten results. While the team had several weekend highs, there were also some lows as a scary incident ruined the weekend for W Series drivers Megan Gilkes and Shea Holbrook.

“It was an up and down weekend as emotions were both very high and very low,” explained Team Owner Phil Picard. “To put together an eleventh hour deal to put Quinlan in the car and then to be on the podium twice with him is awesome and well deserved for the entire team, but to have two damaged race cars that were not repairable trackside for two of our drivers is a gut punch and puts a lot of things into perspective.”

After qualifying fourth on Saturday morning, Lall went on to secure a fourth place result in round nine on Saturday afternoon. Narrowly missing the podium, the Momentum Motorsports driver returned Sunday with a vengeance. With very little testing behind the wheel of the F3 car, Lall utilized his natural skills and abilities to drive forward and secure a pair of podium results Sunday finishing third in both rounds ten and eleven, and adding to the Momentum Motorsports 2019 podium total.

Veteran Momentum Motorsports driver Kent Vaccaro added a trio of top-ten finishes to his results resume finishing tenth, ninth and tenth over the weekend. Battling hard and showing top-five pace, Vaccaro was a victim of track position and was unable to make headway at the fast and flowing Virginia International Raceway.

With all the good from the weekend came some bad as a pair of Momentum Motorsports drivers were involved in a scary incident during round nine on Saturday morning. Contact between Megan Gilkes and Shea Holbrook damaged both of their racecars beyond repair as the duo was forced to retire form the event weekend.

Picard added, “It is unfortunate to be leaving VIR with two damaged cars but we will regroup, refocus and rebuild. We have a month off before Road America and will need to turn the cars around and get them back on track for some test laps. I am just glad that both of the drivers are good and racecars can be rebuilt.”

Momentum Motorsports will now shift their focus to the penultimate rounds of the 2019 F3 Americas Powered by Honda schedule, set for August 22-24 at Road America.