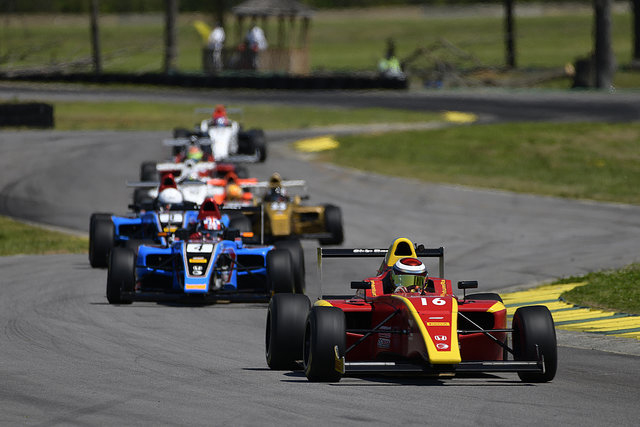 “Kent showed tremendous speed in race one and had moved his way forward from his 21st place qualifying effort to run inside the top-ten,” explained Phil Picard, Owner of the Skip Barber Momentum F4 program. “Qualifying did not go as planned as there were multiple caution laps limiting our running time. Unable to put together the necessary combination of laps to establish a quick time, we started out from behind during Saturday’s race one.” 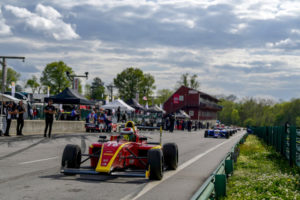 Driving like a seasoned veteran, Vaccaro placed his Skip Barber Momentum F4 machine perfectly on track and took advantage of some other driver’s misfortunes. Making pass after pass, Vaccaro continually decreased his lap time as he marched his way forward. Inside the top-ten and making a pass for ninth, Vaccaro would drop a wheel and sustain damage to the right rear and fell to the 27th position.

With the race two grid being established from the race one fastest laps, Vaccaro would start outside row five in the tenth position. Completing only five circuits, Vaccaro was taken out of contention from race two but not before some team strategy. After an early race spin on cold tires that caused a major vibration, the team decided to pit Kent for four fresh Pirelli tires. Getting him back out on track for a few laps, Vaccaro had a fresher set of tires for race three.

Picard added, “Kent had an unfortunate spin early and flat spotted the tires. With a huge vibration and no chance at a decent finish, we decided to already begin our preparations for race three and brought him in on a strategy call.”

Race three would see much of the same for the Skip Barber Momentum F4 driver. After starting in the 27th position and progressing forward well inside the top-fifteen, including 12 passes on the opening lap, an unfortunate on track incident saw Vaccaro punted from behind and off the racing surface. Tumbling down the running order and ruining the chances of a solid result, Vaccaro would end his weekend with a 24th place finish.

The F4 United States Championship Powered by Honda will enjoy a few weekends off before traveling to the challenging Road Atlanta facility in Braselton, Georgia on the May 10-12 weekend.