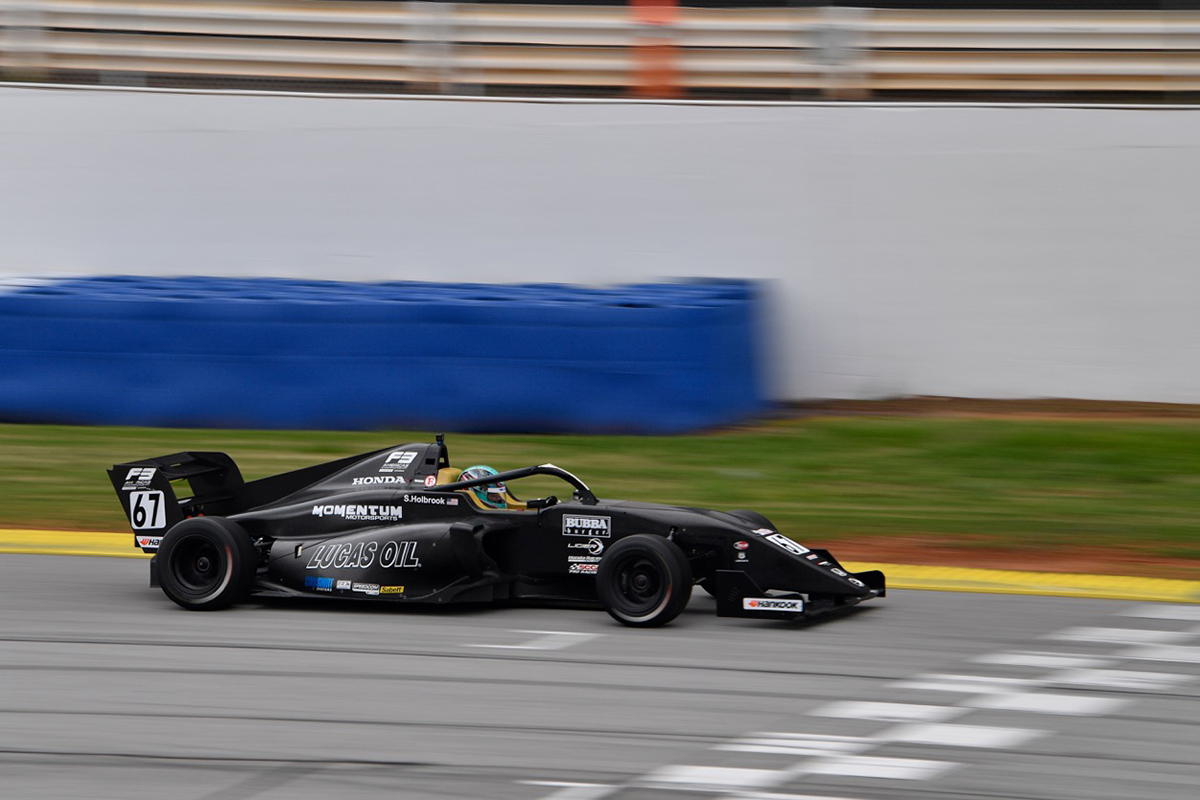 PODIUM AND POLE POSITION FOR MOMENTUM MOTORSPORTS AT ROAD ATLANTA

With two events in three weekends, it has been a quick start for the F3 Americas Powered by Honda program as well as the Momentum Motorsports drivers. With Kent Vaccaro claiming a podium result in round two, and Shea Holbrook taking the Hard Charger Award, both drivers were back at Road Atlanta and continued their trending progress. With another podium in Georgia, Momentum Motorsports also secured their first pole position of the year as both drivers showed speed once again at the fast and flowing circuit.

With Friday morning qualifying cancelled due to severe weather, series official wanted to keep teams, competitors and their families safe from the high winds, dangerous lightning and driving rain. Setting the grid for round three based on series points, Vaccaro lined up outside row two while Holbrook would take the first green on the weekend from the eighth position.

“Friday was a little bit of a disaster due to the weather,” explained Momentum Motorsports Phil Picard. “The series made the right decision to cancel qualifying, and we thank them for that. Our only on track action of the day, round three of 2019, did not go as we would have liked. With Kent falling back to finish 11th, Shea managed to maintained her position to cross the line in eighth.”

Race two on the weekend was a huge success for the Momentum Motorsports squad. Taking place on Saturday morning, Holbrook scored her first career podium in F3 Americas while Vaccaro turned the fastest lap of the race, thus lining him up on the inside of the front row and the pole position for round three later that afternoon. Shea’s podium was the second podium result for Momentum Motorsports on the 2019 season.

Picard continued, “Shea drove a great race. She kept her nose clean and drove forward. Finishing fourth on track, she was elevated to a podium result after a penalty to another competitor. She showed speed, poise and attacked when the opportunity presented itself. Kent had some bad luck, but in doing so, gave himself some clear track and was able to click off the fastest lap of the race and courtesy of that, claimed his first pole position of the year for round five this afternoon.”

Looking to capitalize on their first and tenth place starting positions, Vaccaro and Holbrook took the green for the last wheel-to-wheel action of the weekend. Holbrook continued her steady and consistent improvement forward to claim an eighth place finish while Vaccaro’s results were hindered by a mechanical issue that relegated him down the running order to 11th.

Picard added, “Our results in round three were not a true illustration of our weekend and that is a disappointment.”

With two months off until the next event, Momentum Motorsports will reengage in their test program for drivers looking to compete in either the F3 or F4 programs. With open seats available for the remainder of the year, the series will take the next green flag on the June 21-23 weekend at the Pittsburgh International Race Complex.